Newbury Park, California, is a small town nestled within the Conejo Valley. Additionally, most of Newbury Park is located the western city limits of Thousand Oaks, the second largest city by land mass in Ventura County, encompassing 55 square miles. This community is only 35 miles from Downtown Los Angeles, making it a part of the Greater Los Angeles Metropolitan Area. In addition to that, Malibu, the nearest coastal city, is only 22 miles away from Newbury Park, and is accessible by back roads or by crossing the Santa Monica Mountains via numerous hiking trails. Newbury Park and Thousand Oaks have both been ranked among the most peaceful and affluent communities in the country. In the 1950s, the family owned Janss Investment Company developed both Thousand Oaks and Newbury Park as a master-planned city, which included 2,000 single-family residences, 1,000 custom home lots, a 200-acre business district, as well as several community shopping centers. The town is named after Egbert Starr Newbury, who was one of the first purchasers of the former Rancho El Conejo, buying 2,200 acres in 1874. Newbury was a sheep farmer but also grew some acres or wheat. In those days, Newbury and his family were one of only five families who lived in the Conejo Valley. Although Newbury Park is much older than Thousand Oaks, much of Newbury Park ended up annexed as a part of Thousand Oaks.

Owning a home in Newbury places you just one hour from Long Beach, 45 minutes from Santa Clarita, and only 30 minutes from Malibu. All these destinations have exciting attractions for all ages and walks of life. Besides that, there is plenty to do in the Newbury Park area as well. One of the most notable attributes of living in the Conejo Valley is all of the natural green spaces available to the public. For example, there is the Conejo Canyons Open Space, a 1,628-acre open-space park featuring diverse natural features such as volcanic mountains, prominent ridgelines, deep canyons with perennial streams, and a variety of natural habitats. The Conejo Open Space Conservation Agency (COSCA) owns and operates the park, and is used for horseback riding, hiking and mountain biking. If you’re looking to entertain the entire family, especially children, there is Six Flags Magic Mountain located only 35 miles from Downtown Los Angeles. This 262-acre theme park features themed areas such as DC Universe, Screampunk District, Bugs Bunny World, along with others.

Beautiful and impeccably maintained SINGLE-STORY residence with RV access located inside a charming neighborhood of Newbury Park. You are initially greeted to a walkway w...

Welcome to your new home with a pool in Dos Vientos! This 4 bedroom, 3 bathroom, corner lot home in the Harvest Moon neighborhood is move-in ready. Upon entering, you'll ...

This Newbury Park one-story home offers granite countertops, and a two-car garage. This home has been virtually staged to illustrate its potential.

Views! Views! Views! This is the home you've been waiting for! Beautifully designed with thousands spent in upgrades & featuring 5 bedrooms & 3 bathrooms, (downstairs bed...

Based on information from CRISNet MLS as of All data, including all measurements and calculations of area, is obtained from various sources and has not been, and will not be, verified by broker or MLS. All information should be independently reviewed and verified for accuracy. Properties may or may not be listed by the office/agent presenting the information. The listing broker's offer of compensation is made only to participants of the MLS where the listing is filed. 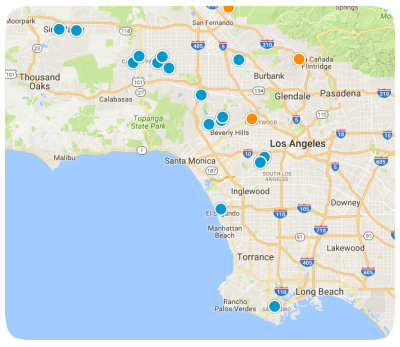